Laos is the least traveled country in Indochina and as you can see from our country review, this may be with good reason. Sadly, it also means that fewer people have written about Laos than the other countries in our “best books” series and thus, we’ve had to be a bit more lenient about our criteria than we have been for the other lists.

We’ve also included a lot more fiction than on other lists for this reason too. 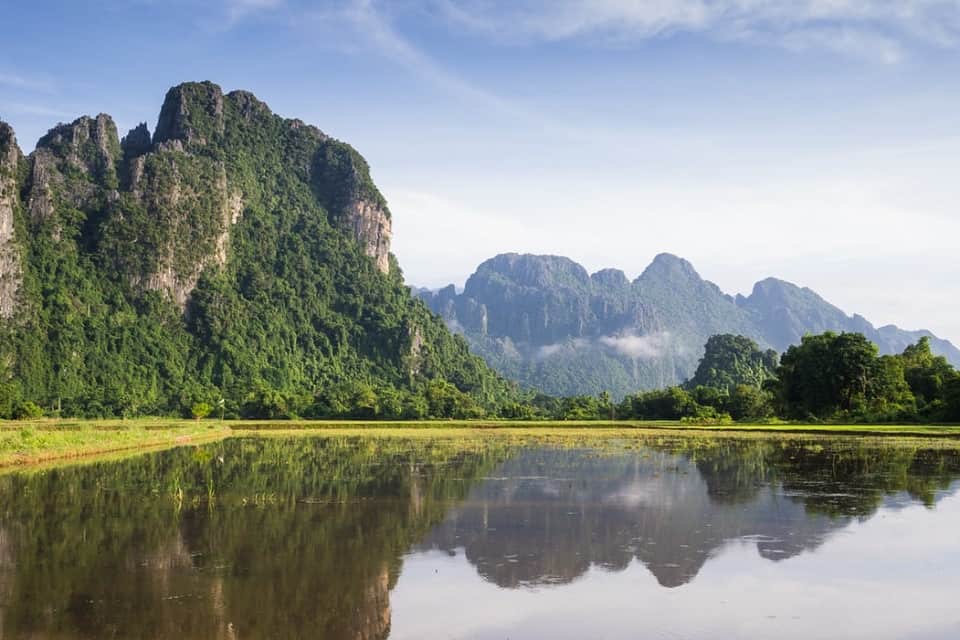 The Coroner’s Lunch by Colin Cotterill

I really liked these books when I started reading them and I’ve read the first 8 or 9 books in the Dr. Siri series of which, The Coroner’s Lunch, is the first. They are an entertaining romp in a communist-era and later in a post-“opening up” Laos.

Dr. Siri’s first adventure takes place as he turns 72 in the Laos of 1978. He is the national coroner of the new regime and has to balance politics with his duties at every turn. He has a murder to investigate, a ton of government problems, hill tribes to deal with and more.

At the time of writing, there are 14 books in this series – which means I need to catch up somewhat. Which I may well do this week.

You can check out The Coroner’s Lunch by Colin Cotterill on Amazon along with the rest of the series, here.

Escaping The Tiger by Laura Manivong 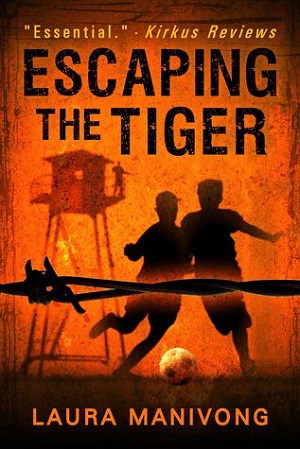 This is a children’s book but it’s a pretty good one. You won’t find that it takes too much time to read and it is full of genuinely accurate historical detail and it’s a gripping tale too. It’s the story of “Skeleton Boy” who needs to flee the new communist regime of Laos and make it to the other bank of the Mekong and reach the refugee camps of Thailand, where maybe, he and his family will be safe.

Of course, life’s not that simple and Laura Manivong’s tale is based in the grim reality of 1970s Indochinese politics.

You check out Escaping The Tiger by Laura Manivong on Amazon here. 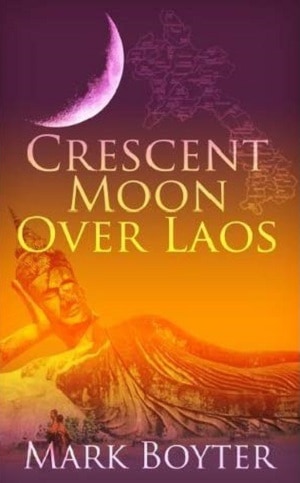 Our third entry on the list is a genuine travel tale! Mark Boyter was one of the first foreigners to visit Laos after it opened up following the strictest communist period. He’d been teaching English in Japan up to that point. Life in Laos would prove to be more challenging than he’d ever have believed.

The crescent moon of the title comes from a song by Glenn Chatten. It’s a touch on the affected side as books go but it’s one of the few accounts of the opening up era and as such, it’s a priceless insight into Laos.

You can check out Crescent Moon Over Laos by Mark Boyter on Amazon here.

Another Quiet American: Stories of life In Laos by Brett Dakin 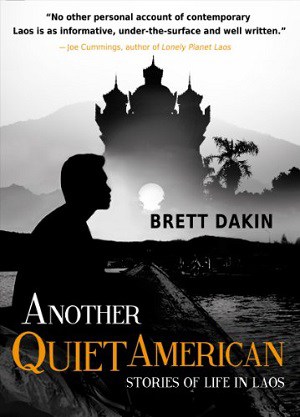 It’s a much better book than the Mark Boyter work above but Brett Dakin was 10 years later to Laos when things were much settled and he seems to have missed the fact that The Quiet American by Graham Greene (a truly excellent novel and the film’s worth watching too) was set in Vietnam and not in Laos.

This doesn’t stop the story of this Princeton grad’s arrival and 2 years in Laos from being well told and genuinely interesting. Dakin appears to have a very strong affection for the people he encountered on his journey.

You can check out Another Quiet American: Stories of life In Laos by Brett Dakin on Amazon here.

Love Began in Laos: The Story of an Extraordinary Life by Penelope Khounta 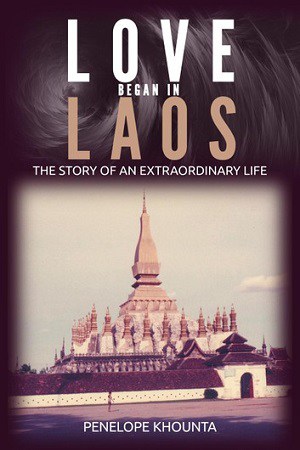 This isn’t a dreadful book, but it is designed to appeal to a fairly narrow field of readers. Penelope Khounta was a middle-class American until she fell in love with and married a Laos man on a visit to Laos.

The whole thing feels like an overly romanticized account to lonely would-be Thai/Lao brides. We’re not sure most people would have the endurance to take on 30-years of total failure to communicate across cultural divides but if that sounds inspiring to you – you might want to read this book.

You can check out Love Began in Laos: The Story of an Extraordinary Life by Penelope Khounta on Amazon here. 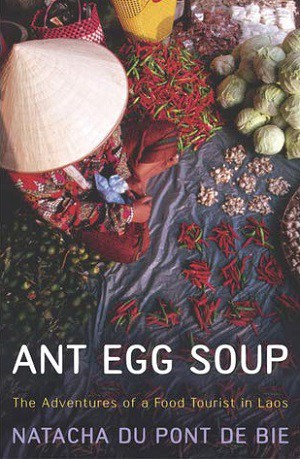 We thoroughly approve of people wandering through Southeast Asian cooking cultures and then finding the dishes on offer mind-bogglingly different from those served back home. We confess, we’re not huge fans of Lao food ourselves – it’s like a down market Thai and we’d rather gorge ourselves on the amazing French food available in Vientiane anyway.

However. Natacha Du Pont De Bie (a ridiculously hard name to type at the end of a long day) threw herself in completely. Ant egg soup and raw turkey blood chasers were soon on her personal menu. This is a thoroughly entertaining book that is as likely to put you off your dinner as it is to make you hungry.

You can check out Ant Egg Soup: The Adventures of a Food Tourist in Laos by Natacha Du Pont De Bie on Amazon here.

I Little Slave: A Prison Memoir from Communist Laos by Bounsang Khamkeo 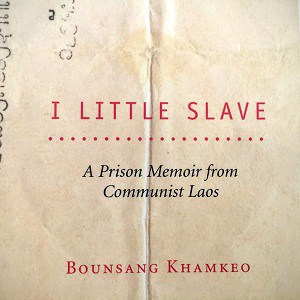 If you ever wondered why Lao people got onboard cheerfully with a communist uprising (and why it worked so well when compared to say, Cambodia next door) – it can be found in the fact that the traditional way to say “I” was, in fact, to say, “I little slave”.

Educated overseas, Bounsang Khamkeo, was not a natural fit for the revolution but he played his part for years until he was finally thrown in jail when the new regime decided he could no longer be trusted. Then he fled the country for the United States following years in jail. This is his story.

You can check out I Little Slave: A Prison Memoir from Communist Laos by Bounsang Khamkeo on Amazon here.

One Foot in Laos by Dervla Murphy 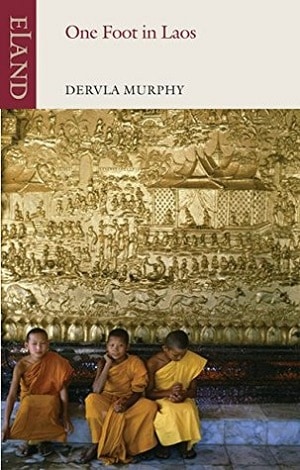 This is not Ms. Murphy’s finest hour. She may be one of the world’s most recognizable brands in travel writing but One Foot in Laos is a patronizing account of trekking in the country in 1997. All Lao are amazing, all Americans evil, it borders on the completely insane at times.

There were important points raised during the book which get lost amidst Derval Murphy’s own very clear prejudices. It has bad reviews on Amazon and a bad review from us – it’s only on our list because of the shortage of alternatives.

You can check out One Foot in Laos by Dervla Murphy on Amazon here.

Shooting at the Moon: The Story of America’s Clandestine War in Laos by Roger Warner

This is sadly out of print because it may be the most important book on our list. Did you know that during the Vietnam War the Americans dropped more bombs in Laos than had been dropped by all the combined powers in World War 2?! Well, they did and yet, they were never officially “at war” with Laos.

This is the story of the CIA insanity which waged a quiet and cruel campaign on Laos for the best part of a decade just because, really.

You can check out Shooting at the Moon: The Story of America’s Clandestine War in Laos by Roger Warner on Amazon here.

The Edge of Tomorrow by Tom Dooley 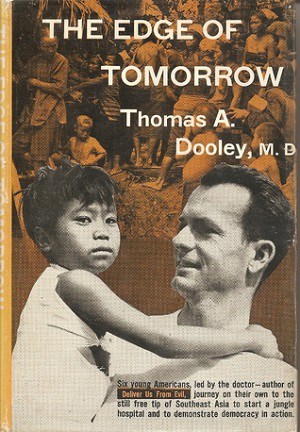 Tom Dooley’s “The Edge of Tomorrow” has nothing to do with the Tom Cruise movie. It’s a story of an American doctor in Lao during the 1950s and the challenges he faced in providing medical and humanitarian aid in the country.

It’s something of a specialist work and it’s one of three books Dooley penned outlining his contributions to human rights across many countries. He won the Congressional Gold Medal after his death too.

You can check out The Edge of Tomorrow by Tom Dooley on Amazon here.

Stalking the Elephant Kings: In Search of Laos by Christopher Kremmer 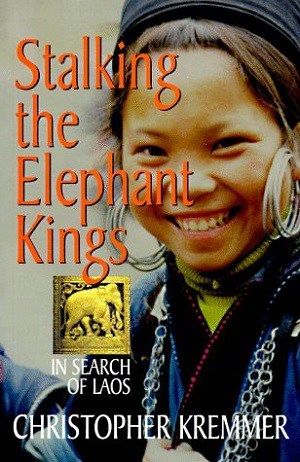 Once the Indochinese wars had ended and Laos had opened up again, Kremmer went in search of the Lao royal family “the Elephant Kings”.

His tale takes us through Laos as well as Vietnam and Cambodia border zones and explores the impact of the Vietnam war and the rise of communism in Indochina.

Sadly, if you want to read it – secondhand copies are quite expensive and there’s no e-version (as yet).

You can check out Stalking the Elephant Kings: In Search of Laos by Christopher Kremmer on Amazon here.

These are the 11 best books about Laos (more if you count the whole Dr. Siri series) but we have to be honest, we’re still waiting for the defining work on Laos. We suspect there’s a story really worth telling if someone decides to tell it.